Why read bad books when I can save you the trouble? 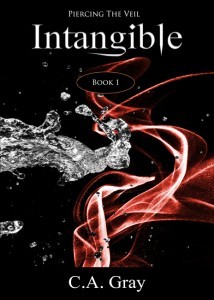 Peter Stewart grew up on a unique version of the Arthurian legends taught him by his father, a harebrained quantum physicist who asserts that anything is possible. But Peter disbelieves anything which cannot be scientifically explained, despite a nagging sense that there is more to the world than meets the eye.

Lily Portman is an orphan with a secret: she can see creatures that are invisible to everyone else. These creatures control every human being she has ever met to varying degrees… until she meets Peter and his father.

When a mysterious stranger stages an accident which nearly costs Peter and Lily their lives, suddenly Lily learns that she is not crazy after all, and Peter discovers the truth of his father’s stories… including the existence of Arthur’s ancient nemesis, one who calls himself the Shadow Lord, and a prophecy with implications so profound that it will alter not only the course of their lives, but potentially the fate of the world.

I received an ARC from NetGalley in exchange for an honest review.

Arthurian legends have never interested me in the slightest. In fact up until now, all I could have to you about King Arthur is that he had something to do with a round table. And so when I received this book I can tell you that if I had anything else on hand to read, reading this book would have been postponed. However, I was very pleasantly shocked by this book!

The novel follows a modern-day 14 year old science nerd called Peter, who after an “accident” caused by a stranger, finds out that all of the bedtime stories told by his father were true. If you are a bit hesitant to read about a 14 year old boy, I initially felt the same, but my opinion quickly changed. Regardless of age and gender, I still think you can enjoy this book. Having never read any books based around Arthurian legends, I found the story line very unique. And because of this it was a very refreshing change from books that I usually read.

The characters were fantastic in the sense that they were believable. Their reactions to things that were happening and what they were discovering were all understandable. I quite liked Peter as the hero of the story because growing up he wouldn’t have seemed very heroic with him being a weedy unpopular kid. (Who doesn’t like an underdog?) The only thing remarkable about him was his extreme intelligence. His knowledge of science actually played into the story very well as it was used to somehow make the fantasy element logical. Peter wasn’t the only interesting character, others were also great such as Lily, a girl who had dealt seeing things that no one else could her whole life and yet still remained a strong girl who was very sure of herself and her sanity.

Gray created a world so believable that at times I had to remind myself that I was reading fiction. Remind myself that there is no “Ancient Tongue” for me to control things and no little invisible creatures wrapped around me telling me what to think (and I am still reassuring myself of this now). I have a lot of reverence for Gray for truly making you consider that anything is possible.

What was also nice about this book was that it wasn’t completely predictable. While I admit I did partially guess what the twist at the end was, it didn’t occur to me until very near the end. One thing that does irk me a bit, was that it was never made clear who was aware of this twist (for example, if the others involved knew about it). Hopefully that will become clear in the next book.

Speaking of the end, I can’t decide whether I am very disappointed with it, or I admire Gray for finding a way of definitely getting me to read the next book. At any rate, I will certainly be reading the rest of the series when it becomes available.

If you haven’t read this book, you should give it a shot.